I've seen Microsoft Office 2010 do many bad, and even stupid, things. But this one really tops them all:

Right, so I can't open Excel 2010 because there's something wrong with the internet connection (or so it thinks - I'm actually writing this blog post so I have no idea what Excel smoked). But seriously, why the hell does Excel need the internet to open a spreadsheet?

Downloading Microsoft Office?? Dude, it's installed on my machine.

This is the single most annoying 'feature' I have ever encountered in a piece of software. A close second is having to open Excel twice, because it doesn't open the spreadsheet I double-clicked, the first time.

A new category of facepalm needs to be invented for Microsoft. The silly bugs encountered in LibreOffice are nothing in comparison. Goodbye, MS Office. Hello, LibreOffice.
Posted by Daniel D'Agostino at 11:05 AM 4 comments:

Finding and deleting Thumbs.db in subfolders

I found this post really useful for recursively locating and deleting Thumbs.db files in subfolders. This comes in handy especially when you're checking whether two folders are equal, based on size, but there are lots of Thumbs.db files running around that make life difficult.

In a nutshell, first go to the folder you're inspecting in cmd. Then, locate Thumbs.db files like this:

Read the whole article for full details (including PowerShell commands).
Posted by Daniel D'Agostino at 2:35 AM 1 comment:

LibreOffice blows... its chance at credibility

I have long believed that the open source movement tends to produce higher quality software than commercial companies. However, many people seem to think that LibreOffice sucks. I wonder why? 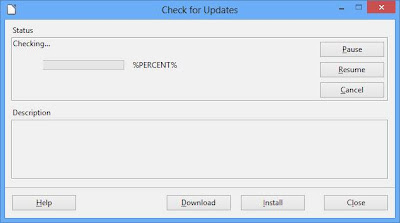 Then, just yesterday, I uninstalled LibreOffice because I wasn't using it, and got this:

What this means is that the folks behind LibreOffice don't even bother to test their software. Now seriously, are we really supposed to trust our precious essays, theses, and shopping lists in the clutches of such abysmal software? Hell no.
Posted by Daniel D'Agostino at 10:09 AM No comments:

I have recently started another blog called Programmer's Ranch, featuring short, daily, concise and practical articles for programmers of all levels. It is accompanied by a Facebook page for updates, questions, and discussion. So far the articles have focused on C# for beginners using SharpDevelop, but more variety is intended in the future.

Follow Programmer's Ranch for daily programming articles, and like the Facebook page. Random encounters in the IT world will still be posted to this blog (Gigi on IT) as they happen.
Posted by Daniel D'Agostino at 7:11 AM No comments:

I found out the hard way that it isn't as easy to separate declaration and implementation of template classes (via .h and .cpp files) as it is for regular classes. In fact, it's not even possible to do so. The following questions and answers on StackOverflow shed some light on why this limitation exists:

Posted by Daniel D'Agostino at 3:43 AM No comments:

As a LaTeX beginner, a problem I ran into while trying to set up my first bibliography was that of undefined citations. I was using TeXnicCenter and opening a .tex file, which uses a .bib file to store the bibliography. I was getting question marks wherever I used \cite, and the build log reported the following:

This problem is answered on this page, which explains that BibTeX is actually not used if you just open a .tex file directly in TeXnicCenter. Instead, you need to set up a project and tick the "Use BibTeX" checkbox. If you already have a standalone .tex file, a very quick and easy way to do this in TeXnicCenter is to go in the Project menu and click "Create with active file as main file". You can then check "Use BibTex", choose your language settings, click OK, and live happily ever after.

Posted by Daniel D'Agostino at 10:21 AM No comments:

Zynga. Until a few years ago, this company didn't even exist. Then, like a plague, silly games like FarmVille began to spread on Facebook. Two years ago, Zynga actually became worth more than EA, making many of us wonder what the world is coming to, while legions of virtual chickens were fed by people with nothing better to do with their lives.

Working at EA was once the dream of any amateur game developer, but now it must be Zynga. So let's chase our dreams, and apply for a job with Zynga! Going into the Zynga homepage, following the "Jobs" link at the bottom, and selecting "US Careers", we find that just in the States, there are many locations where it is possible to work for Zynga. Wow! The excitement is growing (yeah, right). So we pick Austin, TX, United States and view the Software Engineer (Austin) position. Here's what we get: 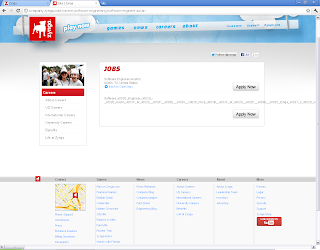 Well, the vacancy is a mess, but Zynga is a big company, and we can just look for another position somewhere else, right? 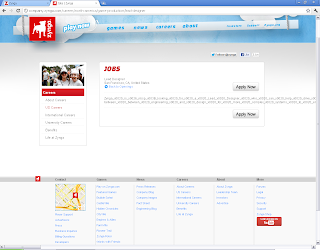 When finding something else in San Francisco, it seems like that, too, is screwed. Since we're good citizens, let's tell Zynga about the problem. 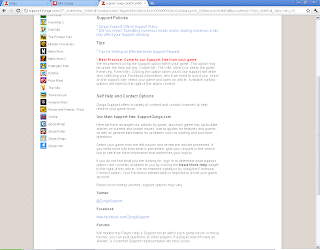 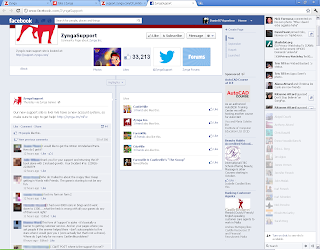 As a first time user you might expect to find some good customer service here, but all you see is complaints from disgruntled Zynga customers. The Zynga Facebook page (below) is no different, with countless complaints that nobody seems to answer. Makes me glad I'm not a Zynga customer, and positive that I'll never be one. 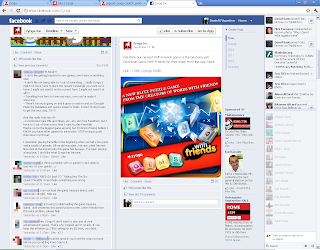 As a last resort, in the Contacting Zynga Support page there's a "Need More Help?" link on the right that takes you to per-game support. Of course here you're going to expect to see people complaining about issues, but is anyone answering them? 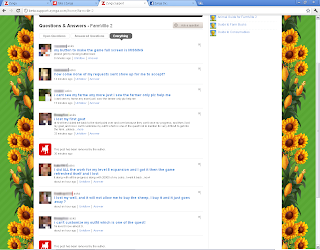 It pains me to see fully grown men complaining that "i lost my first goat", but seriously, is this how Zynga treats its customers? To be fair, it's notoriously difficult to contact other big game companies as well.

What really annoys me is that any contact is always regarding games. Is it really so hard to imagine a situation where a customer wants to send a game company an email about something general, such as a problem with the website, or permission to use in-game material, etc? It's quite clear that such companies care only about the cash, and unfortunately, many people in the world are stupid enough to give it to them, even for something as ridiculous as FarmVille.
Posted by Daniel D'Agostino at 10:44 AM No comments:

Daniel D'Agostino
I've been writing on the internet since 2002 (see my website), and that led to my education and career in IT. I'm a MSc graduate and a Senior Software Developer.